A New Landscape of Decentralized Media

Mainstream media is facing serious challenges. We see a lack of trust from the public in the news they consume, for many reasons such as censorship, unverifiable information, and private interests. However, it is possible to see that the root of these problems stem from the way power is organized in a centralized way. The pitfalls of centralized media platforms have shown that there can be harmful effects to the way the network is controlled.

As a response, different projects are using the most advanced technologies available to tackle issues like censorship and untrustworthy information. Over the course of these decades, there is fast-paced innovation which experiments with the way we access and participate with news and media. Social media revolutionized the way we access current affairs. Blockchain technology and other decentralized networks take us a step further, transforming the distribution of power within media networks - from centralized to decentralized.

Trust in media is decreasing

A 2018 study by the American analytics organization, Gallup, shows that since 1976 (post-Watergate era) 72% of Americans trusted in the national media. In recent years, the proportion wavers at around 40%, with the lowest point in 2016 with 31%. The reasons for distrust these days include "fake news" (especially during the Trump administration), bias, inaccuracy, information based on personal opinions or emotions, sensationalism, hype, corporate agendas and clickbait. It is also important to keep in mind that the media landscape has radically evolved since the 1970s, pertaining to much more than television, radio and newspapers. Social media, web journalism and citizen documentation have changed the media landscape, notably facilitated by smartphones. This change may be a carrier for the untrusting sentiment towards media in younger generations. 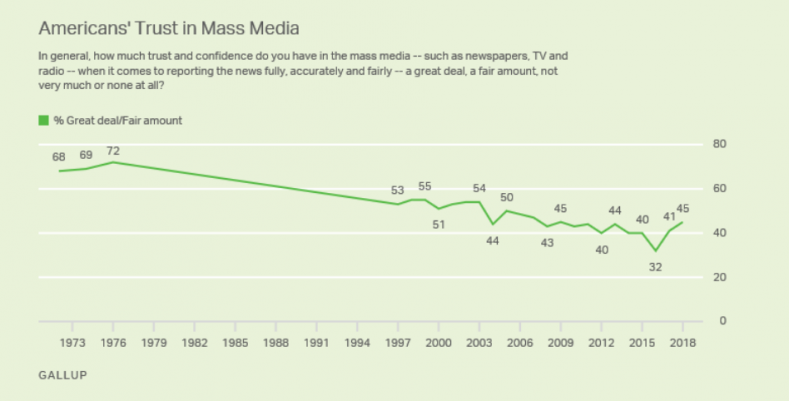 ​On one hand, smartphones and social media have allowed us to access the world like never before, making communication more instant and convenient. Increased accessibility has an influence on the quality of information, since anyone with an internet connection can share their subjective views and opinions, which become woven together with objective facts. Unfiltered, unregulated production and consumption of media involve questionable sources and motives. It becomes difficult to verify false from fact, since there is no systematic verification.

Furthermore, scandals over the past years show that content on social media can be manipulated to instill a private agenda. For example, it was revealed that in early 2014, Cambridge Analytica took personal information without authorisation to build "a system that could profile individual US voters, in order to target them with personalised political advertisements." Whistleblower Christopher Wylie even revealed how data was used to psychologically twist Facebook users:

"We exploited Facebook to harvest millions of people's profiles. And built models to exploit what we knew about them and target their inner demons. That was the basis the entire company was built on."

What people may not always realize is that a great deal of these issues surfacing in regards to "the media" stem from the centralized structure of the industry. When power accumulates into greater centres of control, information easily becomes manipulated, and may serve for purposes other than purely the interest of the audience. Let's examine some of the differences offered by decentralized approaches to media, with a few examples of projects which have an innovative approach to redistributing power to the users.

As discussed above, central powers with full control makes information vulnerable to censorship and manipulation. Oppressive regimes around the world can be both explicit or implicit in the control of the press. For instance - while civil unrest in Hong Kong unfolds as people protest for democratic reform, the news of the protests have been hushed and filtered out of Chinese social media. BBC reports earlier this month: "It's common for social media companies in China to remove content that is perceived to be threatening to social stability or the ruling Communist Party." In a globalized age where the world is so interconnected, censorship is a threat to human freedom and communication.

1M5 (Invisible Matrix Services), a decentralized autonomous mission, has been developing digital tools that embrace freedom of speech and information. The 1M5 protocol works by integrating a number of peer-to-peer (P2P) networks, such as Tor and I2P, to bypass centralized control and censorship, making sure data never reaches central servers. More precisely described:

"1M5 is a secure open-source decentralized peer-to-peer application platform with end-to-end encryption and anonymity as a base layer for creating easy to build and use secure decentralized peer-to-peer applications requiring no server connections that can be used around the world by any person looking to protect their communications and personal data from unjust intrusion, interception, monitoring, and censorship."

The 1M5 protocol is open-source and unlicensed, meaning that developers are able to embed the protocol within a variety of applications without having to worry about copyright and jurisdiction issues, while ensuring privacy and transparency. This is a game-changer when considering the impact such a tool can have on the distribution of news, media, and journalism.

First developed by Brian Taylor, the 1M5 protocol is now used to support a growing number of applications. The first project to use the protocol is Inkrypt, a startup emerging from Harvard Innovation Labs. Inkrypt aims to publish content in a distributed way, by fragmenting the hosting and delivery of information so that it cannot be blocked or censored. This makes the content permanent and immutable in the decentralized database. By using Inkrypt, journalists, authors and other individuals can protect themselves while avoiding censorship or prosecution by those they may speak against (e.g China). Inkrypt writes:

"The current centralized internet architecture is prone to censorship, breach and latency, and nations all over the globe use these shortcomings to censor content. We believe in a truly free internet where anyone has the ability to anonymously publish and store content without risk of censorship."

In 2018, Inkrypt partnered with Po.et Development Labs. Po.et is a separate project which focuses on content ownership, discovery and monetization in media. Content owners are given a blockchain-powered marketplace, enforcing an immutable way to license their content. Furthermore, claims to ownership or authorship are established and referenced throughout the network. Former Po.et CEO, Jarrod Dicker, explains:

"By leveraging information and data, Po.et can provide an extendable platform for end-to-end transparency in media attribution and valuation. The platform will showcase, archive and track content where buyers and the community set its value. It provides a steady signal to creators of the quality of their work, as rewarded by the community, brands and publishers."

Another emerging decentralized application is SalamTalk. More than a news platform, SalamTalk focuses on exposing political conflicts from within and facilitating dialogue. Unlike the homophilic algorithms of most social media, SalamTalk invites users to encounter "the other", with a search engine designed to allow you to discover people with lives and backgrounds very different than your own. Furthermore, citizen journalism is encouraged in an ecosystem of ratings and reputation to ensure trustworthiness. 1M5 protocol will also be used on SalamTalk to protect interactions taking place on the platform from censorship and surveillance. Since 1M5 provides intelligent routing, P2P networks are used as a shield to strengthen the security and integrity of the communication data. This is essential to protect the privacy of interactions and safety of individuals in politically sensitive environments.

Another project work mentioning is DNN (Decentralized News Network), which tackles the issue of fake news head on. Powered on the Ethereum blockchain, the decentralized network means that:

"Authority relies on content reviewers, rather than a central authority. Published works will be determined by the people, for the people, and undergo an extensive review process. Fact-checkers will validate writer submitted content for overall accuracy and legitimacy… Introducing a transparent system that has accountability and no central authority will help differentiate them from the fraudsters."

For a democratic and scalable solution to journalism, DNN ensures a new architecture for the creation, curation, and publication of content with a focus on spreading true, verified information. With a native currency, the user community is invested in the content that is produced and published on the platform.

Significant changes in the media industry

What these projects show us is a new organization of information to respond to the needs of a suffering media landscape. Unlike centralized media platforms we are familiar with, there are several key characteristics embedded in the decentralized alternatives. Firstly is monetization frameworks. Using native currencies and/or micropayments revolutionize the way media platforms are funded and how different contributors may profit. Secondly is reputation systems. Jarrod Dicker said at the 2018 World News Media Congress that reputation in decentralized media can "stomp out bad actors and rise good actors and this will elevate the entire media system because the incentivisations are financial", and so being dishonest can turn out to be costly. Thirdly is the principle of community in journalism. Everyone is a contributing member. There is no longer just a producer and a consumer, everyone plays an active role in the ecosystem.

On top of that, there are reactionary approaches to the main issues in centralized media. Some of the themes that these projects deal with are:

Traditional journalism is a suffering field. Research shows that one in five local papers have gone out of business in the past 15 years. The digitalization of media was the first step of renewal, and now decentralization opens up a new horizon of possibilities. Freedom of speech is now embodied in code, overcoming a historical hurdle that changes the way we interact with information and allowing power to flow in new directions.